EF1 Tornado: What Kind of Damage can a Tornado Cause? 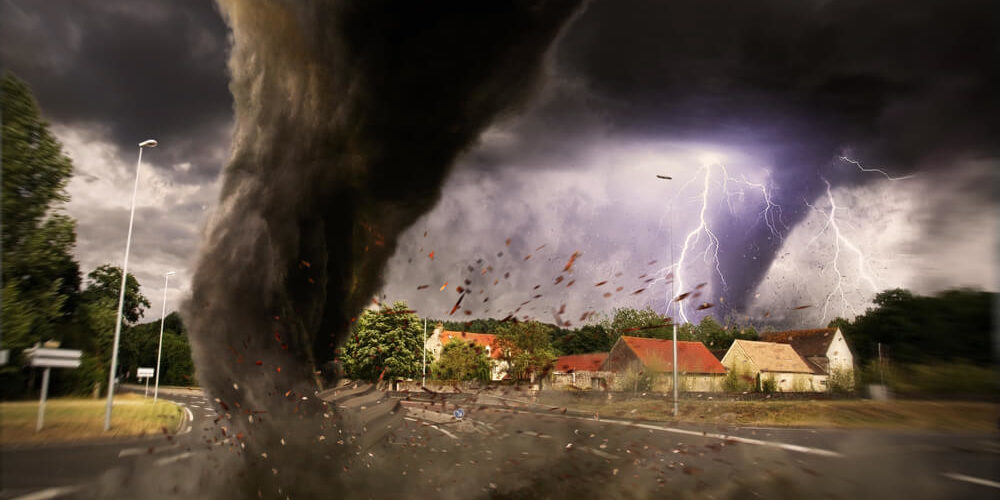 We’re heading toward the end of June and most of us in Florida, Georgia, South Carolina and North Carolina are prepared or getting prepared for hurricane season, but we don’t give tornado damage much thought. We may know what hurricane damage is and how we can deal with it, but tornado damage? That’s something different.

Tornado damage must be given its due during hurricane season, because a tornado can pop up at any time during severe weather – even just your average afternoon summer thunderstorm can spin off a tornado. Any one in Florida, Georgia, South Carolina and North Carolina can end up having to deal with tornado damage.

So just what are we talking about with tornado damage? What kind of damage can a tornado cause? Let’s have a look.

Tornado Damage and the EF Scale

Tornadoes are ranked on a scale according to their intensity and the damage they can cause. In the United States, the scale is known as the Enhanced Fujita scale or EF scale for short. The scale is based on wind speed and goes like this:

Tornado damage can be minor or major depending on the strength of the tornado, but even an F-1 tornado can have major consequences for homeowners. According to the scale, an EF 1 tornado can cause:

Any tornado damage is a headache for homeowners, but roof damage may be one of the costliest to repair. And even an EF-1 tornado can cause damage to a roof.

Roof damage can include damage to shingles and flashing. Tornado damage can also occur to roof structures such as vents or chimneys.

If you think you have roof damage from a tornado, contact us today for help.

Wondering if your homeowner’s insurance covers tornado damage is a good question. Most of us in Florida, Georgia, South Carolina and North Carolina are aware of our hurricane insurance, but we don’t talk much in the Sunshine State about tornadoes.

But tornado damage is a problem in Florida, Georgia, South Carolina and North Carolina because tornados can pop up just about any time we have a serious thunderstorm.

So, the only way to know for sure if your homeowner’s policy will cover tornado damage is to read the policy or talk to your insurance professional.

But there are a few things to consider:

Was the tornado damage caused by wind?

Tornado damage can have several causes. So, one thing to ask yourself if you have tornado damage is was the damage caused by wind?

If you have shingles blown off your roof or a large tree blown down on your roof, it may be clear the tornado damage was caused by wind. In a case like that it should be covered under the windstorm section of your homeowner policy.

Was the tornado damage caused by flood?

Now what if the tornado damage was caused by floodwater? Even a minor tornado can produce flooding rain. Most homeowner policies don’t include flood coverage. If you aren’t sure if you have flood coverage, check with your insurance professional.

Was the tornado damage caused by Hail?

Many tornados pack a bigger punch then wind and rain. They can pack hail. Hail can be devastating for homeowners and cause major damage to your home. Hail can damage roofs, windows, trees, and outdoor structures.

It is difficult to prepare for and prevent tornado damage because there is not a lot of warning time to prepare for a tornado. If you are under a tornado warning here are a few precautions to take immediately:

There are many misconceptions about tornadoes and tornado damage. Here are a few you can dispel immediately.

Tornadoes happen only in the Midwest: FALSE. Tornadoes are usually spawned by thunderstorms. Any where there is a thunderstorm there can be a tornado.

You can see a tornado coming. FALSE. Often tornadoes cannot be seen from a distance. Make sure to stay tuned in to your local weather station for updates.

Hurricane damage is worse than tornado damage: FALSE. Even an EF1 tornado can cause damage to your roof, trees and other parts of your home.

Just in the past two months, two tornadoes were confirmed on the East coast. They brought rain, thunder and hail to counties in February and March.

There were no injuries reported, but the tornadoes caused a tree to topple onto someone’s home, a lightning strike burned a chickee hut and there were numerous power outages across counties.

If you have tornado damage and need help with your insurance claim, contact us today.

Company and adjuster who came over the house was great and professional. They went through everything in the house, places the bank never did. They help through all the way in the process. Definitely will recommend them.
END_OF_DOCUMENT_TOKEN_TO_BE_REPLACED